Making sense of money: How to explain it to children

Home > Making sense of money: How to explain it to children 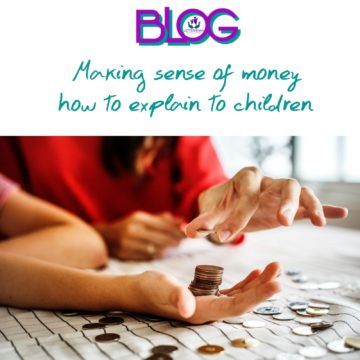 It helps if you understand it yourself…

The main way your children are going to learn about money is by observing how you handle it. No pressure.

Since most of us are as sensible with money as a bear with a honey-pot, this can pose a problem, especially since “Do as I say, don’t do as I do” tends to go down badly with most children.

All parents want their offspring to be better off than they were, so while the first thing to do is to try to make sure your own spending and saving habits are good, there are also a few other ways you can teach your children about money.

Getting children used to the concept of money, by letting them hand over money for treats, etc., in the shop will familiarise them with the idea that money is something of value that can be exchanged for what they want.
Play money

Playing shop games with your children is not only a good way to get them to use maths, but it also gets them thinking about the value of money and embeds the idea of making a transaction in their minds.

When they’re old enough, giving them a little bit of pocket money to use as they wish helps get children used to the idea that there are limits to what you can do with it.

It’s inevitable that they’ll overspend and be left with nothing – probably more than once. Resist the temptation to cave under pressure and give them a little more, they need to learn that you can’t get more money simply by wishing for it. Better for them to learn this aged eight over a handful of sweets than age 25 when the rent is due!

Encouraging your children to save some of their allowance each week is a great idea – although they might take some convincing at first. One good way to encourage saving is by offering to match whatever they manage to save at the end of the month.

Once they see how much more they can do after putting some money aside, they’ll keep the habit for the rest of their lives. This also gives them a basic idea of how interest works.

One technique that works for some parents is getting three jars and labelling them ‘Spend’, ‘Save’ and ‘Share’. Each week give your children their allowance and have them divide it up between the jars.

The ‘Spend’ jar is ready cash, money they can spend right away on whatever they like.

The ‘Save’ jar is money they can’t touch, but save up for however long you decide. Once this jar reaches a certain point, get them to put it in a savings account.

The ‘Share’ jar is money to donate to a good cause.

You might expect the ‘Spend’ jar to empty very quickly and the others to fill up slowly, and at first that probably will happen. However, after a while, as the ‘Save’ jar gets fuller, you may see them start to save up their ‘Spend’ money for a while as well.

This system lets them see the direct benefits of saving vs spending indiscriminately, as well as teaching them that it’s possible to put their money to use for something other than their own personal gain (that’s the ‘Share’ jar at work).

Many parents give their kids the chance to earn extra by doing additional jobs around the house to teach them about earning money, which is also a great lesson.

There’s no doubt about it, it can be tricky to give your children a good understanding of how money works and the best ways to make it work for them, but encouraging them to save regularly by opening a Letterkenny Credit Union account is a great way to start.

For more information, pop in to Letterkenny Credit Union today.

This website uses cookies to improve your experience while you navigate through the website. Out of these cookies, the cookies that are categorized as necessary are stored on your browser as they are essential for the working of basic functionalities of the website. We also use third-party cookies that help us analyze and understand how you use this website. These cookies will be stored in your browser only with your consent. You also have the option to opt-out of these cookies. But opting out of some of these cookies may have an effect on your browsing experience.
Necessary Always Enabled
Necessary cookies are absolutely essential for the website to function properly. This category only includes cookies that ensures basic functionalities and security features of the website. These cookies do not store any personal information.
Analytics
Analytical cookies are used to understand how visitors interact with the website. These cookies help provide information on metrics the number of visitors, bounce rate, traffic source, etc.
Performance
Performance cookies are used to understand and analyze the key performance indexes of the website which helps in delivering a better user experience for the visitors.
Advertisement
Advertisement cookies are used to provide visitors with relevant ads and marketing campaigns. These cookies track visitors across websites and collect information to provide customized ads.
Targeting
Functional
Functional cookies help to perform certain functionalities like sharing the content of the website on social media platforms, collect feedbacks, and other third-party features.
Save & Accept